Our Lady of the Miraculous Medal

In 1830, the Virgin Mary appeared to a novice in the Vincentian religious order.  Her
name is Catherine Labouré.  Sister Catherine was stationed in Paris and was destined
to become a canonized saint.  In fact, she became an incorruptible ... a person whose
body never decomposed, despite the fact that it was in a natural setting where it should
have long since turned to dust and skeletal remains.

These apparitions began when a young luminous entity was at Catherine's bedside,
telling her that the Virgin Mary was waiting to see her in the chapel.  She instantane-
ously thought about the nuns nearby, and the luminous being said to the effect, "You
don't have worry about them.  They're sleeping."  The being was an angel in the form
of a crystalline child.

Catherine made it to the chapel, and suddenly, she heard the rustle of silk.  A woman
then appeared and took her seat in a prominent place.  Catherine was wondering if the
woman was the Virgin Mary.  Then suddenly, the childlike entity instantly developed
a deep masculine voice, saying,  "She IS the Virgin Mary."  Catherine then fell into her
lap, and the two talked for a while.  other things transpired, such as a second visit of
Mary which occurred in late November of that year.  In November came the point
of the apparitions.

Now, all apparitions have a message applicable to all in a given society or community.
Our Lady wanted humanity to be aware that she is the dispenser of graces.  Of course,
graces comes from the treasury known as the Holy Spirit, and Holy Spirit proceeds to
humanity through the wounds of Christ.

She wanted reminders of the truth of her involvement with grace to be cast on earth and
seen.  In fact, she wanted this to be worn around people's necks.  So, Mary posed as
the model for the medal now known as the Miraculous Medal.  Mary also asked for a
relatively comparable statue depicting much of the same to be cast and distributed.

The most important part of the Parisian apparitions of Our Lady to Sister Catherine
Laboure goes as follows:  Catherine noticed that rays were coming from many of the
jewels on the rings Our Lady was wearing.  The rays were in different intensities.  As
Catherine was noticing this, Our Lady spoke.  He said that the rays were symbolic of
graces, and the jewels from where came no rays are the graces for which the priests
and laity stopped asking.

The Rue de Bac apparitions are important for understanding of how grace operates.
Very simply, if you don't ask for grace to come to you or to another person, it won't
come.   Without prayer, nothing gets accomplished.   Only emptiness sets in.   Now,
emptiness is lack and evil is the lack of a good which ought be present but is missing.
The lack of prayer allows the rooted emptiness to sprout.  It creates mindlessness,
too, making the person who never prays one who get easily deceived.

Incidentally, at Rue de Bac the Virgin Mary prophesied that the archbishop of Paris
would be assassinated, stating this while she had tears in her eyes.  It came to be,
proving the Rue de Bac apparitions to be true ones.  He was assassinated during
June of 1848, the first of two major revolutionary years in 19th Century Europe,
the second year being 1870.

The archbishop was attempting diplomacy at barricades during a riot.  The typical
history book marks him as having been mortally wounded by a stray bullet.  How-
ever, according to the 1830 prophecy, the archbishop would be targeted.  Now,
the purpose of the 1848 revolution was to overthrow the Metternich System.  The
Bishop of Paris wasn't seen as a brother or as another Saint Francis of Assisi.  He
was seen as a part of the aristocracy.  In 1848, he was shot on a Parisian street.

The bottom line is this:  You have got to pray for the conversion of poor sinners
during this era where sin is the rule and not the exception.  In as much, when you
undergo a suffering or intentionally offer a sacrifice, pray as follows:

It is for the love of you, my Jesus, in reparation for the outrages
committed against the Immaculate  Heart of Mary
and for the conversion of poor sinners.

As was previously mentioned months ago, if you make this offering while in intense
suffering, you might feel a sense of alleviation.   The vice-grip atmosphere surround-
ing those locked in mortal sin loosens.   You, in your Catholic Instinct, might feel the
sense of relief.

As far as goes the holiest prayer that one can say without the need of an altar, see:

In understanding a thin outline of the Holy Trinity's interaction with each member
of said Trinity see:

One more thing:   If you pray for the conversion of your enemies, your enemies will
become your friends.  In the process of their conversion, you somehow start feeling
sorry for said enemies.  It's an element of compassion.   Being compassionate is what
it means to be godlike.   Mercy is God's greatest attribute.  The merciful are the ones
most like God. 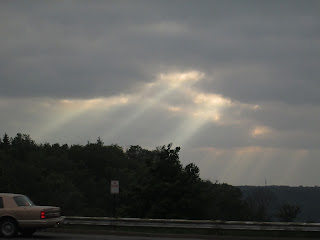 Concerning the world of grace, take note of an important differentiation in it.  The im-
portance exists in the fact that the economy of grace ... the administration of grace ...
the showering of grace involves the Virgin Mary and she has received a lot of hatred
from specific pockets of humanity who reel in envy over the idea that she is the one
involved in any person on Earth receiving graces.   As was confirmed at Rue de Bac,
Mary is the Mediatrix of All Graces.   This requires a distinct qualifying statement, so
as to prevent confusion.   In as much, take note:

The dispenser of Sanctifying Grace is the Holy Spirit.  The dispenser of Actual Graces
is the Virgin Mary.  Now, Mary is the dispenser of actual graces, being that she is the
master link in the chain of Divine Love which was sacramentalized in the lives of men
and women at the Last Supper.   It was at the Last Supper where Christ gave the last
commandment that he will ever give ... Love one another as I have loved you.  Well,
Mary knows the "as" part, being that she was there at the beginning of Christ's appear-
ance on Earth and she was there at the end.   In as much, Mary is the flower girl who
tosses actual graces, internal and external, to humanity ... not randomly, though.  For
every grace dispensed, there is a target for whom the grace is intended.

The Virgin Mary knew the personality of the Messiah in depth.  In fact, her blood lit-
erally ran through him.  She knew the way, the personality traits, and the intensity of
this love which existed in eternity.  Thus, she is the master link of believers in Christ
who love one another the same way in which Christ loved us.  In loving others as did
Christ, a person then transforms into Christ, and this brings us back to the mystery of
love ... the mystery of transforming into the object of your love.

An actual grace is an impulse from God upon the soul that will result in the soul doing
good.  Being that the dispenser of actual graces is the Virgin Mary, it helps to refer to
the apparitions of Rue de Bac, Paris, 1830.   It's actually known as the Virgin of the
Globe apparitions.  People know it is Our Lady of the Miraculous Medal.