What It Means to be Baptized a Priest, Prophet, & King 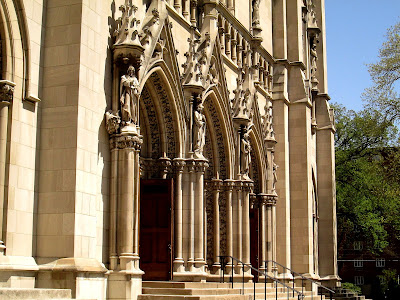 For those unfamiliar with the rite of baptism, after a person is baptized in the Catholic
Church, the baptizing priest tells the person, in the presence of the person's sponsor,
that he/she is baptized a priest, prophet, and king.  The meaning of the title goes as
follows:

To be "baptized a priest" means that you have the power to offer prayers & sacrifices
for the conversion of sinners and to obtain results in the process.  This is your most
important power, because Christ came "to save his people from their sins.,"  When
you partake in Christ's highest mission, it makes you the most Christlike amongst
all of humanity.

To be baptized a prophet means that you know the mind of God and the eventual
consequence of living contrary to God's mind.   Now, the Mind of God, the Way
of God, the Will of God, and the Law of God are the exact same thing.  In being
baptized, you instinctively know the way God is.   Prophets are social consciences.
In being baptized a prophet, you literally receive an instinctive conscience.  You
instinctively  know the intimate details of God's personality.  This includes God's
likes and dislikes.  God's dislikes are known as sins.

To be baptized a king means that you were christened as was King David and that
the christening enables you to share in the Divinity of Christ.  This means that you
have the power to unite your works with Christ and make them infinite.   This was
indicated at Fatima, in a prayer that the Angel of Peace taught the Fatima children,
in 1916.

As a qualifying note, in order to have the power to absolve penitents from sin, one
needs the sacrament of Holy Orders.  Firstly, it is an absolute lie to claim that you
confess your sins in private and that God forgives you, as if you exist in a vacuum,
far far away from other human being.  Secondly, it's important to note that the priest-
hood powers of Holy Orders and the priesthood function that comes with baptism are
entirely distinct.  A layman can obtain a person's conversion, by obtaining the grace
of conversion for that person.  But, only the ordained priest has the power to absolve
that person from his/her sins.

No matter how evil the priest is, he has the same power to absolve you of your sins
as does any other priest.  His problem is that he cannot absolve himself of his sins.

As an additional qualifying statement, if a person is near death, yet no priest is near-
by, the solution from God is that of giving the dying person the grace to commit either
a Perfect Act of Contrition or a Perfect Act of Love.  If the person is not yet baptized,
then there is the possibility of the person receivng the grace to perform a baptism of
desire.  If the person never heard of Christ and his church, the person is assessed by
the precepts of natural law.  Contrary to the White Anglo Saxon Protestant mindset
of 19th Century America, in the Kingdom of God, ignorance IS an excuse of the law.
If you never heard of the Messiah, you are not bound to believe in someone you nev-
er knew existed.  However, when you die, you will be presented with him, and that
is when you make your eternal decision.

Now, it is a 100% lie to say that you chose "Jesus as your Lord and personal savior."
In the scriptures, Jesus is quoted as having said, "You did not chose me. Rather, I
chose you."  You can chose nothing and no one without the grace to do so.  Christ
choose to give grace.  You have zero power to take it from him.  In fact, the must
psychotically distrustful conspiracy theorists I have ever had the aggravation of
encountering all have one arrogant belief.  It's the belief that the "Christ conscious-
ness" is within us all, and all we have to do is extract it.  These are the ones who
refer to holiness as being a "highly evolved person."  This is merely self-worship,
in claiming that you're God with all the consciousness of divinity within.  Such
persons I encountered all had a few things in common.  1}  They were never in
the "popular school clicks,"  2} they were too uncoordinated to excell at sports
and even became envious at those who did,  3} they were emotionally cold and
even nerdlike.  They were too proud to confess their sins to a priest, claiming to
be the new priests.  Again, they are cases of self-worship.  Concerning sin ...

Let's go one step further:  If a person isn't sorry for his sins, but wills to cease
committing his mortal sins, the absolution given to him after confessing his sins
is valid.  This is called attrition.  Thus, there is contrition (sorrow for sin) and
there is attrition (admitting guilt and resolving to amend your ways without be-
ing contrite.)  Attrition and a good confession results in the forgiveness of sins.

True martyrdom requires you to die unarmed.   Dying while killing someone is not
martyrdom.   It might be just warfare and an act of war heroism.  It might even be
justified self-defense.  But, it's not martyrdom.  Furthermore, blowing yourself up,
along with many unarmed people on a bus, is never martyrdom.  It's murder and
you will go to Hell for all eternity immediately after having wasted your life and
the lives of others, as a suicide bomber.

Conversion only comes through actual grace

As was previously mentioned, an important feature of the priest, prophet, and king
state is the power to obtain the conversion of sinners.   Fatima affirmed how this
worked.  No one is converted in a vacuum.  Nobody is converted by persuasive talk.
A person is only converted by actual graces being bestowed upon the person in need
of conversion.

This is the most important aspect of the Fatima apparitions, because Hell is forever.
After all, you take with you into eternity take the love or anti-love within you the
moment you enter into Eternity.  Now, people have repeatedly witnessed Hell on
Earth.  Therefore, if there is Hell on Earth, there most certainly is Hell in Eternity.

If you don't pray for conversions, people won't be converted.   In having been bap-
tized a priest, you have the power to obtain the conversion of others even if you are
in a state of mortal sin.   Sin doesn't take away your power to offer prayers and sa-
crifices for others, being that sin doesn't take away your baptism.  When a person
commits mortal sin, the individual doesn't have to be baptized again.  In as much,
the Anabaptist movement was an error.  A person can only be baptized once.  Any
further attempts at baptism it is an illusion.  Anabaptists of old where called South-
ern Baptists.

If you don't know if you have ever been baptized, the officiating priest will perform
a Conditional Baptism upon you, just to make sure.  If you are near death, and no
priest is available, a baptized layman becomes the one assigned to baptize you.  The
laity does have the power to baptize.  Using that power becomes lawful when death
is near and no priest is available.  If no Christian is present to baptize you, your de-
sire to be baptized is baptism in itself.  Such is the Baptism of Desire.

There is also Baptism by Blood.  This is the case, when you die for the faith before
receiving the opportunity to be baptized by water.  There is only one door to mercy.
But, there are more than one key to open the door.

Now, in order to gain spiritual indulgences for the souls in Purgatory, you need to
be in the state of sanctifying grace.   None the less, you need not worry if whether
or not you are in the state of grace when praying for the conversion of poor sinners
who will otherwise be in Hell for all eternity without your assistance.

If you are devoted to the Mercy of God, and if you are obtaining the conversion of
sinners while in the state of mortal sin, know that, one day, the sacrifices or prayers
of another person will obtain your conversion.

Of course, praying for the conversion of sinners is an act of mercy each time you
do so.  St. Francis de Sales, former Bishop of Geneva Switzerland, wrote that pray-
ing for the souls in Purgatory is actually the act of performing all of the works of
mercy at once.  Do not be deceived.  Purgatory exists.  Denying its existence illu-
strates that you are a lazy person who refuses to ease suffering.  It also makes you
a coward in your perpetual denial.  If you deny the existence of Purgatory, it simply
means that you are afraid of it... that you don't want it to exist.

The caveat is that, sometimes the grace of conversion given to the mercy worker
comes in the form of a fiery awakening, attached to an intense reality check of suf-
fering.  This was the case with King David.  Yet, it was for King David's own good.
After all, Christ stated in the Book of the Apocalypse and to Saint Teresa of Avila,
"I chastise the ones I love."  Thus, if you have done much evil and never were pun-
ished for it, it is a sign that you are destined to Hell for all eternity.

Christ appeared a number of times to a German prioress named, Gertrude.  So too
did Our Lady.  Once, Gertrude saw a vision of Mary where she suddenly opened
her mantel (her long cloak), and near Mary's feet were an array of animals whom
Mary would occasionally pet.  Gertrude asked who the animals were.  Mary said
that they were the sinners who will one day convert.  She said that she kept them
protected, so that their conversion would one day be assured.  So, if you're the
greatest sinner on Earth, always feel welcomed to pick up a rosary, a chaplet,
the Psalms, or a prayer book, and start praying.  Walk the Stations of the Cross.
Meditate on the meaning of various religious images.  Pray what the Angel of
Peace taught the Fatima children in 1916.  If you ask for the conversion of sin-
ners, one of those conversions will be your own.