The Prophecy of Akita is the general version of the Third Secret of Fatima. 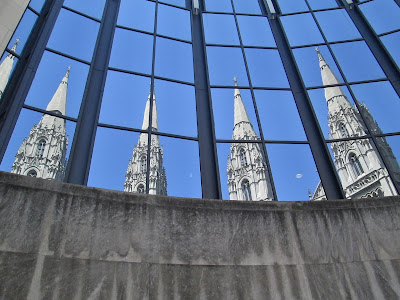 The evidence recently sent to the Vatican which absolutely incriminates Washington
cardinal Donald Wuerl is a continuation of the fulfillment of the Virgin Mary's pro-
phecies made during the supernatural apparitions of Akita Japan and Quito Ecuador.
One prophecy was made to a prioress (a mother superior) and one was made to a
Japanese religious which we in American calls a nun.  The Catholic Church authorities
declared both apparitions valid enough for believing.  The actual phrase is Worthy of
Credence.  None the less, the final prophecy of Akita is transpiring even into the Sum-
mer of 2014.  It's crescendo, therefore, will be relatively soon.

None the less, a completely confidential source confided to me that there are cardinals
at the Vatican who want to "clang swords with Wuerl."  An artillery barrage coming
from Europe, and not America, is expected to be launched against Wuerl at  the be-
ginning of July.  So goes what was confided to me.

If I were Sgt. Schultz, I could say that I know nothing, hear nothing, and see nothing,
while still getting the needed word across to you.  All that I would have to do, to en-
lighten you, is post the link below.  At Akita, Mary prophesied that things will get to
the point where the state of the Church will be a matter of bishop against bishop and
cardinal against cardinal.  That time has long since arrived.  However, the vast major-
ity of the church's anesthetized laity were apathetic to what was occurring.  This is be-
cause its lounge-chair-huddled masses never went beyond the media sound bites of
propagandists whose one-line assertions have been repeatedly proven false.

In all that was transpiring, Mother Angelica was not fooled.  She simply disappeared.
Cardinal Schönborn was not fooled either, and he didn't subscribe to the lies of Ange-
lo Sodano which resulted in a formal petition being filed against him at the Internation-
al Criminal Court in the Year 2011.

Rather than cowering behind Sodano's obstruction of justice, Cardinal Schönborn pub-
licly spoke out against the Angelo Sodano who referred to serious criminal allegations
as petty gossip.  Sodano's indifference to many molestation accusations resulted in the
continuation of untold human suffering.  This prompted Cardinal Schönborn to speak
out against Sodano a year prior, in 2009.  The time-tested disclosure below can do the
communicating on the specific topic.  I pasted the article written by Richard Owen at
the end of this page ... pursuant to the Fair Use Act ... for the sake of emphasis and
concurrence more than convenience:

Keep in mind that Sodano comes from the Opus Dei camp.  Also keep in mind that
during the Franco years, pivotal high echelon government ministers were Opus Dei
members in Spain, from 1957 onward.

You might deny that you are living through the Third Secret of Fatima.  HOWEVER,
you cannot deny that you are living through the prophecies of Akita, especially in light
of Japan's nuclear disasters of 2011.  This means that, if the prophecies of Akita have
not been fulfilled, then the Third Secret of Fatima has not come to pass, either.  For
those unfamiliar, Akita was a series of revelations given by the Virgin Mary to Sister
Agnes Sasagawa, in Japan.  It is a church-approved series of prophecies and private
revelations.  The contents within its narration were tested for cracks and passed the
test.  That is to say, there is nothing of a heretical or apostate nature in the narration.

You have to get one thing straight ... God is slow to anger ... but God is not mocked.
Vatican prelates of recent decades were wearing out their welcomes so much so that
multitudes of  humanity no longer saw them as anything other than squatters who
stole land from the Catholic Church they repeatedly sabotaged.  Peacock throne
arrogance.

Let's face it.  If you cause a number of former altar boys to commit suicide, because
of your musical chairs cover-up policy, you are as good as having pulled the triggers
of each gun that took the lives of each former altar boy, as well as having injected the
lethal drug dose in the arm of each deceased molestation victim who searched for a
measure of solace through the contents of a syringe.

Pursuant to the Fair Use Act, the following is posted.  However, it came from a site
which allows anyone to "reproduce freely," provided that the source of it is given.
This came from Bishops' Accountability.  It's a reprint of a UK Times Online article,
written by Mr. Richard Owen.  The publication date is 2010.

Open warfare broke out in the Vatican over the clerical sex abuse scandal at the
weekend as Cardinal Christoph Schönborn, the Archbishop of Vienna, accused
one of Pope Benedict XVI's closest aides of covering up past scandals.

Cardinal Schönborn, a former theology pupil of Pope Benedict and a close ally, al-
so charged Cardinal Sodano with causing "massive harm" to victims by dismissing
claims of clerical abuse as "petty gossip" on Easter Sunday.   Cardinal Schönborn
accused the former Vatican Secretary of State of having blocked investigations in-
to abuse.  Cardinal Sodano is now Dean of the College of Cardinals and as such
due to convene and chair the conclave to elect the next Pope.  The row thus pitches
the man in charge of the next papal election against one of the leading contenders.

Andrea Tornielli, the papal biographer, said that Cardinal Schönborn's remarks,
made to a small group of journalists and reported by the Catholic news agency
Kathpress, were "without precedent" and a sign of "nervous tensions" in the
Church hierarchy.

Pope Benedict, who on Tuesday travels — volcanic ash permitting — to Portugal,
asked the faithful yesterday to "pray for the success" of his visit to the Marian
shrine at Fatima, where in 1917 the Virgin Mary is said to have appeared to
three shepherd children and confided three "apocalyptic" secrets to them.

The first and second secrets offered a vision of Hell and predicted the Second World
War and the conversion of Communist Russia to Christianity.   The Third Secret was
only revealed ten years ago at Fatima by John Paul II, who — in remarks read out on
his behalf by Cardinal Sodano — said that it referred to the attempt on his life in 1981.

There are persistent reports that part of the Third Secret referring to the collapse of the
Roman Catholic Church in scandals and "apostasy" was withheld.   Vatican officials de-
ny this.

Cardinal Schönborn had previously accused senior Vatican officials of obstructing the
investigation of Cardinal Groer, but had stopped short of naming names.  The scandal
broke in 1995 when a former seminary student said that Groer had abused him repeat-
edly in the early 1970s. Other accusations followed.  Groer stepped down because of
"old age" and died in 2003 without admitting any wrongdoing.

Cardinal Sodano has also been accused by US Catholic journals of persuading John
Paul II not to take action against Father Marcial Maciel, the once revered Mexican
founder of the conservative order the Legionaries of Christ.

Father Maciel, who died two years ago, was found to have abused seminarians and
fathered several children by mistresses.  Pope Benedict has ordered direct Vatican
control of the disgraced order.

Cardinal Schönborn praised Benedict for having pushed for sex abuse inquiries when
he was Cardinal Josef Ratzinger and head of the Vatican's Congregation for the Doc-
trine of the Faith before his election as Pope in 2005.  He said that "others" however
had stopped John Paul II from taking action, adding "The days of cover up are over."

Austria, like other countries in Europe, has been hit by a wave of clerical abuse alle-
gations.  On Saturday Pope Benedict accepted the resignation of Bishop Walter Mixa
of Augsburg in Bavaria.  Bishop Mixa, 69, is the first bishop to step down in the pon-
tiff's native Germany over the abuse scandal.

Bishop Mixa offered to step down last month after being accused of striking children.
However, German prosecutors and Church officials said that they were now also in-
vestigating accusations of sexual abuse when he was bishop of Eichstaett in Bavaria.
Bishop Mixa's lawyer denied the accusations.

A survey last month found that a quarter of Germany's Catholics were considering
leaving the church over the abuse allegations.

Belgian bishops ended a week-long visit to the Vatican on Saturday with a press con-
ference at which they spoke of their pain over the resignation last month of the Bish-
op of Bruges, Monsignor Roger Vangheluwe, after he admitted sexual abuse.

In his remarks to the Belgian bishops Pope Benedict only made an indirect reference
to the Bruges case, saying that their Church had been "tested by sin."