The U.S. Constitution's Establishment Clause and the actual dynamics between Church & State

If there were absolute separation of Church and State in America,
there would have never been chapels on United States military bases.
In light of this, consider the following commonly encountered scenarios: 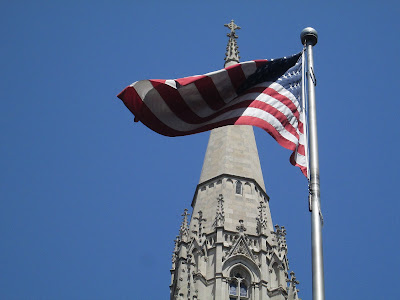 1]  The police officer hired by the State directs traffic solely for the benefit of
parishioners leaving a Sunday church service.  If there were the absolute
separation of Church and State, there would be no police officers directing
church traffic anywhere in America, and there would be chaos on State roads
on Sundays.

2]  The detective hired by the state investigates the allegations of clergy abuse com-
mitted upon parishioners.  If there were absolute separation of Church and State
in America, the molestation of altar boys would have gone unchecked and have
become a pandemic.

3]  In 1844, Philadelphia-area Protestants, in their paranoiac hatred of a pope they
never met, torched a Catholic Church.  In fact, they literally fired a canon at it.
In response, soldiers employed by State rallied to the protection the Catholics
who, at the time, were hated with seething ferocity by certain Protestant sects.
If there were the absolute separation of Church and State, there would have
been either a massacre in Philadelphia or the start of a literal civil war there.

The Conclusion is that the First Amendment Establishment Clause requires the
State to make sure that its citizens are able to freely practice religion.

1] Catholic, Quaker, and Episcopalian schools fulfilled the job of the State in edu-
cating students in non-religion subjects such as mathematics, science, history,
art, and literature.  This means that there are religious institutions functioning
as the State five days a week.  After all, the State enacted mandatory school laws
and religious institutions fulfilled said laws by educating many youth above and
beyond the topic of religion.
Added note:

2] Catholic and Protestant charities of varying sort fulfill the job of the State in going
to the aid of hurricane victims, even to the point of receiving federal dollars in the
process.  In fact, the Catholic Church, for years, received taxpayer dollars through
social service government contracts.  In this capacity, churches have acted under
the color of law.  Churches have become the surrogate of the government.

3] Catholic, Jewish, and Protestant medical facilities act under the color of law each
time their facilities treat a patient sponsored by the medicaid program.

4] Catholic, Jewish, Moslem, Protestant, Hindu, etc, chaplains are hired by the U.S.
government, to care for the spiritual well-being of U.S. military personnel.  They
are not hired to establish any one religion.  Rather, they are paid to secure the re-
ligious rights of the military personnel who need chaplains, in order for the religious
rights to be something real.  During WWII, there were priests at the war fronts giv-
ing last rites to mortally wounded American soldiers and to anyone else caught in
the line fire.  The United State government funded the priests, the chaplains behind
the front line, and the military chaplain in the States.

Other observations involving the relationship between Church and State:

1] The television broadcast of Midnight Mass somewhere on Earth is governed by
the FFC in America.  If there were the absolute separation of Church and State,
the church would have to intrude on frequencies designated by the government,
in order to broadcast to humanity.

2] The private jet which flew John Paul II and Benedict XVI throughout portions of
America flew solely under the law of the FAA.  If there were the absolute separa-
tion of Church and State, the jet carrying a pope would have crashed into another
jet liner eventually, or else such a jet would have created aerial havoc.

3] The priests and nuns made homeless by a hurricane have the right to seek help
from FEMA.  If there were the absolute separation of Church and State, then
priests and nuns would freeze to death during blizzards, drown during floods,
and remain without shelter after tornadoes.

The Federal Judiciary Conclusion:  The phrase "Separation of Church and State"
is a misnomer.  Mention of it does NOT appear in the United States Constitution.  Rath-
er, the United States Bill of Rights has the Establishment Clause which forbids the fed-
eral government or any individual State to establish an official state religion.  The same
clause protects a citizen from having his religion outlawed, unless the religion involves
criminal activity.

The First Amendment Establishment Clause guarantees that NO person will have to
support or adhere to a religion to which he does NOT want to belong.  It also guar-
antees that a person willing to adhere to a specific religion will not be required by the
government to violate his conscience in matters of faith and morals, provided that the
matter of conscience is written into the religion's official doctrine.

In the inverse, if an activity mandated by the State is NOT permitted by a person's re-
ligion, then the individual has the right to not be a part of the activity declared sinful in
his religion.  The most obvious example is war and the Quakers.