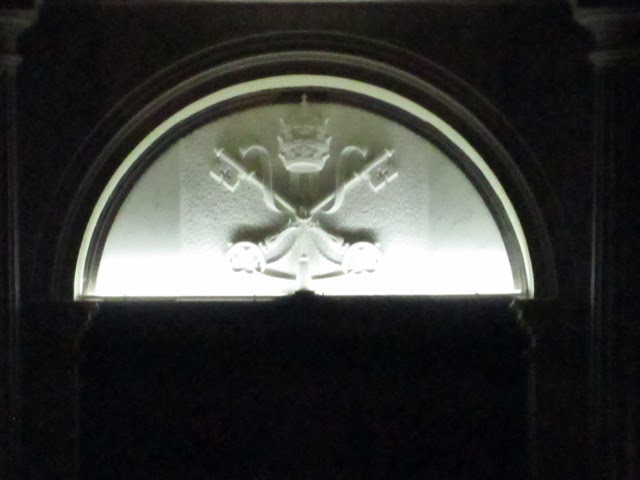 It's an age-old story ... pockets of the more rural Anglo American Protestant world
boldly proclaiming that the pope in non-anglicized Rome is the Son of Perdition ...
... the wicked & evil Antichrist  ...  the abomination of God.   Each pope of recent
centuries had the claim placed on his person, like an indelible tattoo.  However, the
reign of the Antichrist didn't come during any previous papal reign.  Therefore, none
of the popes were the Antichrist, as was obsessively claimed by pockets of the
very non-Latin world.

Now, there are a couple reasons why the papacy's alleged Antichristness is a farce,
especially when considering the Protestant Baptist belief about the Antichrist.  One
belief among the Baptist world is that the Antichrist will be one specific man, as op-
posed to an entire generation of mankind.  Now, there have been 266 popes.  Which
individual pope was the actual Antichrist?    Every pope gets called the Antichrist,
but only one can be him.   Which pope was it?

The pope-paranoia world was one that had little to no exposure to the Latin mindset,
except for the ironic fact that half the English language is actually Latin.  None the
less, the stereotypical anti-Catholicism of Anglo-America is an element of racism
and ethnic prejudice.   It's neither something deep nor ideological.

The Born-again Southern Rural Baptist world repeatedly called the Catholic Church
the Whore of Babylon.   The response to this claim is that Catholicism was the first
Christianity.   It will be the last Christianity, outlasting all others.   God is faithful to
his first creation.   All other forms of Christianity are man-made, centuries after the
fact.

Now, there is only one Jesus.  Therefore, there can only be one church of Jesus Christ.
So, which Christian "communion/denomination/profession" would be the one church?
ANS:  The one which was here first.  If the first form of Christianity isn't the authentic
Church of Christ today, then Christ is a liar.

The House of Jacob

There is an important point to make at this point:  The fact that so much evil has been
transpiring in the Roman Catholic Church is a sign that Satan expressly and singularly
targeted it for destruction above all other institutions on Earth.   In the spiritual world
of angels and demons, it is instantaneously understood that Satan hurled everything he
has against the Catholic Church, because it is the only church ever founded expressly
and deliberately by Christ.  Satan has always sought to enter the House of the Lord
and vandalize it.   Well, the smoke of Satan crept into the Catholic Church.  Thus, it
must be because its the House of the Lord.   In fact, it must be what the Archangel
Gabriel described during the Annunciation, when he said to Mary, "He will rule
over the House of Jacob perpetually, and his kingdom will have no end."  The
House of Jacob is the Catholic Church.

If the Catholic Church were a insignificant denomination, Satan would not have hurled
all the infernal fire power against it that he has hurled.   The Evil One, in his incendiary
beastliness, doesn't plan spiritual massacres against ticket items of insignificance.  This
Satan is a python who wants to crush the Heart of Christ on Earth, being that he can't
touch the Heart of Christ in Heaven.   The Roman Catholic Church and its 22 or so
rites is the Heart of Christ on Earth.   Presently, it is a heart crowned with thorns and
razor wire by its own clergy members.  But, it's Christ's, none the less.

The Catholic Church is presently a desolate wasteland.   But, so was Valley Forge.
None the less, we don't need the added grief of repeatedly hearing the rural Anglo
world in America calling the Catholic Church a whore, as opposed to it being called
a community of faith infiltrated by unconscionable sodomites who saw the priesthood
as a nice racket of furnished rectories and easy access to young men.

Gospel Music: Music popular during the years the Gospels were being written

With this having been stated, know that the sound which the born-again world calls
"Gospel music" is a sound regarded by the average metropolitan northerner as coun-
try music.  It's not something one would regard as mystical or inspirational.  It sounds
boring to city folk.   Moreover, it doesn't sound like any kind of music that would have
been familiar to the apostles or to anyone who lived during the apostolic era.  So, how
can it be called "Gospel Music" when the writers of the Gospel never heard it, played
it, or sung it?"  In as much, Gospel Music is defined as the music played during the days
when the Gospels were being written.  In as much, country music is not Gospel music.

Concerning the Southern Baptist obsession with alleging that the Hail Mary is a thing
of the Devil, along with the Rosary, know this:  The first part of the Hail Mary are the
very words of God the Father, spoken through the Archangel Gabriel and recorded as
such in the Gospels.   After all, "Hail, full of grace.   The Lord is with you," is the
message that God instructed Gabriel to give to Mary.   Therefore, to hate the words
of the Hail Mary is to hate the words of God the Father.   In fact, it is to hate God the
Father, himself.   Saint Louis of Montfort once stated that the Virgin Mary confided
to a saint that the love for the Hail Mary ... devotion to it ... is a sign of predestination.

Lord Protector Cromwell ... His Co-conspirators were convicted and hung.

Incidentally, the Oliver Cromwell who was posthumously declared a criminal in Eng-
land did not win his battles by any power of God.   Even though he was presented as
the Lord Protector and virtuous Puritan, he simply made his conquests through a new
technological invention known as the 90 pound canon ball.   Most Irish castles were
not thick enough to fend off that amount of fire power which can kill any 21st century
soldier as much as it killed Renaissance-era civilians.  This is a case where a murderer
named Cromwell was called the holy man, while the pope was regarded as the evil one.

Rolling over and playing dead?  Don't count on it.

Don't deceive yourself into thinking that the Catholic Church is at the stage where it
will go undefended,  especially by the attacks coming from within it.   At present, we
are experiencing the John Paul Jones Syndrome.   In situations so evil and so seeming-
ly pointless, the instinct to defend usually comes suddenly and unexpectedly, when
people say,  "Okay.  Enough is enough."  After all, it is written,  "The Son of Man
comes as a thief in the night."   If the house cleaning of the Catholic Church is com-
menced by an action of God, it will start suddenly.