These priests were violating the Catholic Faith.
They weren't observing Canon Law in their crimes and retaliations. 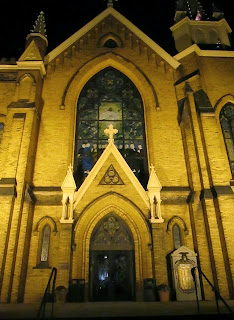 What the molester priests did was something long
since declared sinful in Catholic Church teaching.
They violated the New & Everlasting Covenant.
They abandoned the Faith of Peter and showed
themselves to have had no intent to honor their
priesthood vows.  Hundreds of millions of Cath-
olics go a lifetime without molesting minors.
What those priests did was anti-Catholic.  It isn't a common practice in Catholicism.
Therefore, it isn't a reflection of Catholicism.  They were frauds in clerical garb.  So,
instead of seeking to have the Catholic Church evicted, liquidated, and dissolved from
the Earth, why not get the priests of today to finally practice the Catholicism that they
vowed to uphold?  The Eternal God is changeless.  Therefore, the pivotal elements of
the Faith of Peter are changeless.  Power-grabbing narcissists do not have the power
to change the nature of God.

When Richard Nixon was found to be a violator of United States law, did this mean
that the entire United States was to be declared evil and invalid?  When the starting
picture of a baseball team is getting pounded by the opposing team's batters, does
this mean that you have to dismantle the entire baseball team?  When a person has
a kidney that fails him, does all of his organs have to be removed?

Catholicism is the religion of Saint Patrick going to Mt. Croagh, to fast for 40 days
and nights.  It's the religion of Saint Francis of Assisi going to Mt. Alvernia, to also
fast for the same amount of time.  In fact, Catholicism was made into an art form by
Catherine of Siena, Catherine of Sweden, Claire of Assisi, Claire's sister, and num-
erous other folk, from the hunched back Saint Margaret of Costello who has aban-
doned by her arrogant parents to a Maria Goretti who was martyred at eleven years
to the young Domininc Savio who died at the age of 14 to the Maximilian Kolbe who
died in a Nazi concentration camp.

Catholicism is the religion of those who were sent to the Roman circuses, to be torn to
shreds by lions.  It was the religion the Irish continued to teach from behind hedges, dur-
ing the occupation of the anti-Catholic British.  Catholicism, throughout pockets of time
and quilts of geography, was the hunted one, even during the Soviet years.

What needs to be understood is that the Catholic Church became hunted by uncon-
scionable predators who infiltrated it as wolfs in shepherd's clothing.  Instead of con-
demning the church, compassion should be extended to the laity who suffered at the
hands of the worst that the church could possibly offer in terms of its clergy.

The Cause of the Silence of Lay Members

There is a reason why a number of people in the church remained silent to the outrages
of certain clergy members.  Firstly, not very many knew what was going on, being that
they weren't at the ground zero of the chaos.  Concerning the few who know of speci-
fic things, the silence of some of them was a result of the fear of retaliation, as in what
Father James Torquato did shortly after he was reported to Donald Wuerl for immoral
conduct  ... and concerning what Torquato did shortly after he and Wuerl were report-
ed to local law enforcement officials, a few months later.

There were those who reported other ills to Rome and ended up ignored.  So, they fig-
ured that reporting wrongful priests was a fruitless endeavor.  After all, look at the case
of Marcial Maciel.  Numerous allegations against him were ignored for years.  Report-
ing him was pointless.

The unconscionable clerics and prelates abused their positions.  What they did was not
Catholicism, not Catholicism, not Catholicism.  In as much, Canon Law isn't unchange-
able, infallible doctrine.  It can be amended.  You do not need to destroy Catholicism.
You only need to destroy the Anti-Catholicism of modern clerics who used the wealth
of the Catholic Church ... and its influence ... for their own lusts.  You need to remove
priests such as James Torquato, and bishops such as Donald Wuerl.  You need to re-
move those violating Church teaching.

Test the Intention of the Detractors

When you encounter a vocal detractor of the Catholic Church, you need to test the
person and see if there is honest intentions among him/her.  Test to see if he/she is us-
ing the clergy abuse crisis as an excuse to proliferatehis/her long-term hatred of Catho-
licism.  The hatred of Catholicism usually consists in one of two forms:  1} The desire
to proliferate a lifestyle that Catholic Church Teaching defines as sinful.   2} Being in
competition with the tax free collection basket money that sits in the wallets of Catho-
lics, in the quest to draw Catholics into the detracting preacher's church.  Such de-
traction is solely done out for money.

Some people hate the idea of Purgatory, so they do what they can to discredit Catho-
licism.  This is done in the hopes that no one considers the reality that nothing unclean
enters Heaven; that you still must wash your linens white even after you're absolved of
your mortal sins.  There are other examples.

Some people, of course, are utterly scarred and embittered by the corruption of the
modern Church, as was thriving during the Cardinal Angelo Sodano days.

It is very important that you do not equate power-abusing clergy members with kind-
hearted Catholics of good will.  The Catholic Church needs scoured clean ... and not
destroyed.  Now, Catholicism IS the first Christianity.  Do you really think that the
Eternal God will let it go the way of the ancient Roman ruins?  If so, then God has
nosense of fidelity.

Something or someone brought you into existence in such a way that your existence
is not of your doing.  Thus, you were given life.  You didn't earn it.  This means that
life is your gift.