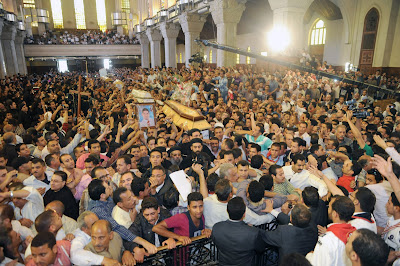 Following attacks made on a Christian funeral service in St Mark’s Cathedral in Cairo,
representatives of the Catholic Church in Egypt have made serious allegations against
the authorities for their actions during the attacks.

Father Rafik Greiche, media spokesman of the Egyptian Catholic Bishops’ Conference,
told international Catholic pastoral charity Aid to the Church in Need (ACN):  “When
severe interreligious unrest took place in Khusus on April 6, and four Christians lost
their lives,  Islamic fundamentalists threatened to attack the church in Khusus if a
funeral service for the dead were to be held there.  Therefore the service was trans-
ferred to the cathedral in Cairo.  The police must have been aware of the situation.
So why were the police not in front of the cathedral?  They only arrived two hours
later, and then they protected the attackers.”

On April 7, at the headquarters of the Coptic Orthodox Patriarch, there were attacks
on Coptic Christians attending the funeral of their brethren who had died the previous
day in Khasus, near Cairo. Unknown persons attacked the mourners with stones and
Molotov cocktails. Two people were killed and more than 90 injured.  In speaking to
ACN, the Coptic Catholic Bishop of Asyut, Kyrillos Samaan, condemned the assault,
in stating, “Nobody could have imagined that anybody would attack such an impor-
tant symbol for all Egyptians as St. Mark’s Cathedral in Cairo.  It is shocking.  But
we will never learn the real motives for these attacks.”

A few hours after the attacks, President Muhammad Morsi, who belongs to the Muslim
Brotherhood, declared his solidarity in a telephone call with Coptic Orthodox Patriarch
Tawadros II.  Father Greiche commented on this, “But what had the President done to
protect the Christians?”  Encouraging, in the words of Father Greiche, is the solidarity
and sympathy of moderate Muslims: “All of our Muslim friends told us that the events
make them feel ashamed.  I recently visited Azhar University, the most important Sun-
ni institution.  Sheiks with whom we are in contact there assured us that such attacks
are not compatible with Islam.”  Fr Greiche continued:  “We are in permanent contact
with the Protestant and Orthodox Churches.  We find much agreement.  That is a bless-
ing.”

Especially significant, in the view of Father Greiche, is the rapprochement between the
Coptic Orthodox and Coptic Catholic Churches since the election of Tawadros II as the
new Coptic Orthodox Patriarch at the beginning of November 2012:

Aid to the Church in Need was founded in the ruins of WWII, during the Christmas
Season of 1947.   It's chain of command literary begins with the Chair of Peter and
it's the Catholic Church's version of the historic Marshall Plan.  It now enjoys the
status of a Pontifical Foundation.  As the title indicates, ACN's clientele are those
in need  . . .  sometimes in immediate need.  So, if you are compelled to be part of
the ACN experience, even in doing something as simple as donating a Mass stipend
or two, feel free to contact  Michael Varenne at michael@churchinneed.org.  You're
also welcomed to contact ACN via: