The Recent Murder of a Catholic Deacon in Syria 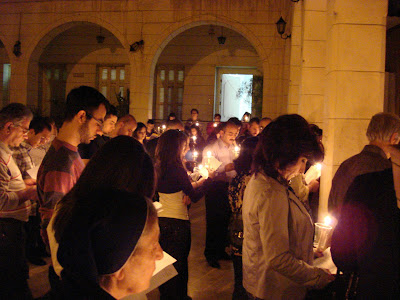 A Damascus bomb blast which killed a deacon-in-training illustrates the extent to
which a Christian district of the city is in acute danger, according to an influential
Catholic bishop.   On Tuesday morning, March 26th, thirty-five year old Benjamin
Camil, was on his way home, after having distributed food to destitute people.  He
never reached his destination.  He was instantly killed by an explosive.

In a message to the Catholic charity, Aid to the Church in Need (ACN), Maronite
archbishop, Samir Nassar of Damascus, called Mr. Camil “a martyr.”  He addition-
ally said that Camil's death shows that the area which is home to many Christians
is now a target for attacks.  Hespecifically  said, “The tragic death of Benjamin
Camil shows that nobody is safe anymore, whether fighter or peaceful civilian.”

The archbishop said that, until now, the faithful had still been attending religious
services, adding, “But the death of Benjamin Camil puts a question mark over
the ability of our faithful to move freely.”  In reporting that, thus far, Church at-
tendance during Holy Week was down by more than 50 percent, he said, “At one
time, our quarter was spared from the conflict.   Now, however, an increasing
number of shells are being fired.”  In view of the intensity of the fighting that
is breaking out everywhere, worse is to come.”

Archbishop Nassar paid tribute to Mr. Camil, saying, “Becoming a martyr during
Holy Week crowns Camil with grace.”  The prelate said, “He was so close to ev-
eryone.  He was always present, with an open ear, and was always ready to  help
and share his modest possessions with those most in need.”  The archbishop said
that, during the conflict, Mr. Camil had been “giving a helping hand with the over-
load of social work during these painful times.”

The Catholic prelate said that Mr. Camil had been based at the Maronite Archbishop-
ric in Damascus, had looked after the sacristy and was in charge of the reception desk.
Mr. Camil was preparing for ordination to the permanent diaconate.  Commenting on
Mr. Camil’s death, the archbishop pondered, “What if Camil had made another choice?”

Contemplating the timing and meaning of the death, the archbishop further comment-
ed, in stating, “To die during Holy Week with the Crucified, to serve and praise for-
ever the Risen Savior and to beg for peace for his martyred country.”  Describing a
Christian decline in Damascus, Archbishop Nassar said that people coming for com-
munion had fallen by 60 percent since the fighting began two years ago, and that
two of the four Maronite parishes had closed. 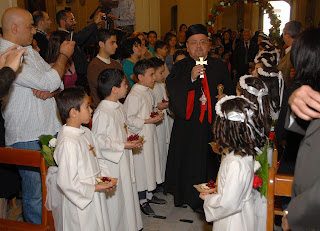 He said  that one parish which still had 30 baptisms in 2002, only recorded three last
year.  The archbishop said that meanwhile the archdiocese was struggling to cope with
the influx of displaced people.  He said, “The misery is great.”  As a Catholic charity
for oppressed Christians, helping refugees and displaced people escaping persecu-
tion, Aid to the Church in Need has prioritized aid for victims of the crisis in Syria.

Aid to the Church in Need was founded in the ruins of WWII, during the Christmas
Season of 1947.   It's chain of command literary begins with the Chair of Peter and
it's the Catholic Church's version of the historic Marshall Plan.  It now enjoys the
status of a Pontifical Foundation.  As the title indicates, ACN's clientele are those
in need  . . .  sometimes in immediate need.  So, if you are compelled to be part of
the ACN experience, even in doing something as simple as donating a Mass stipend
or two, feel free to contact Michael Varenne at  michael@churchinneed.org.  You're
also welcomed to contact ACN via: