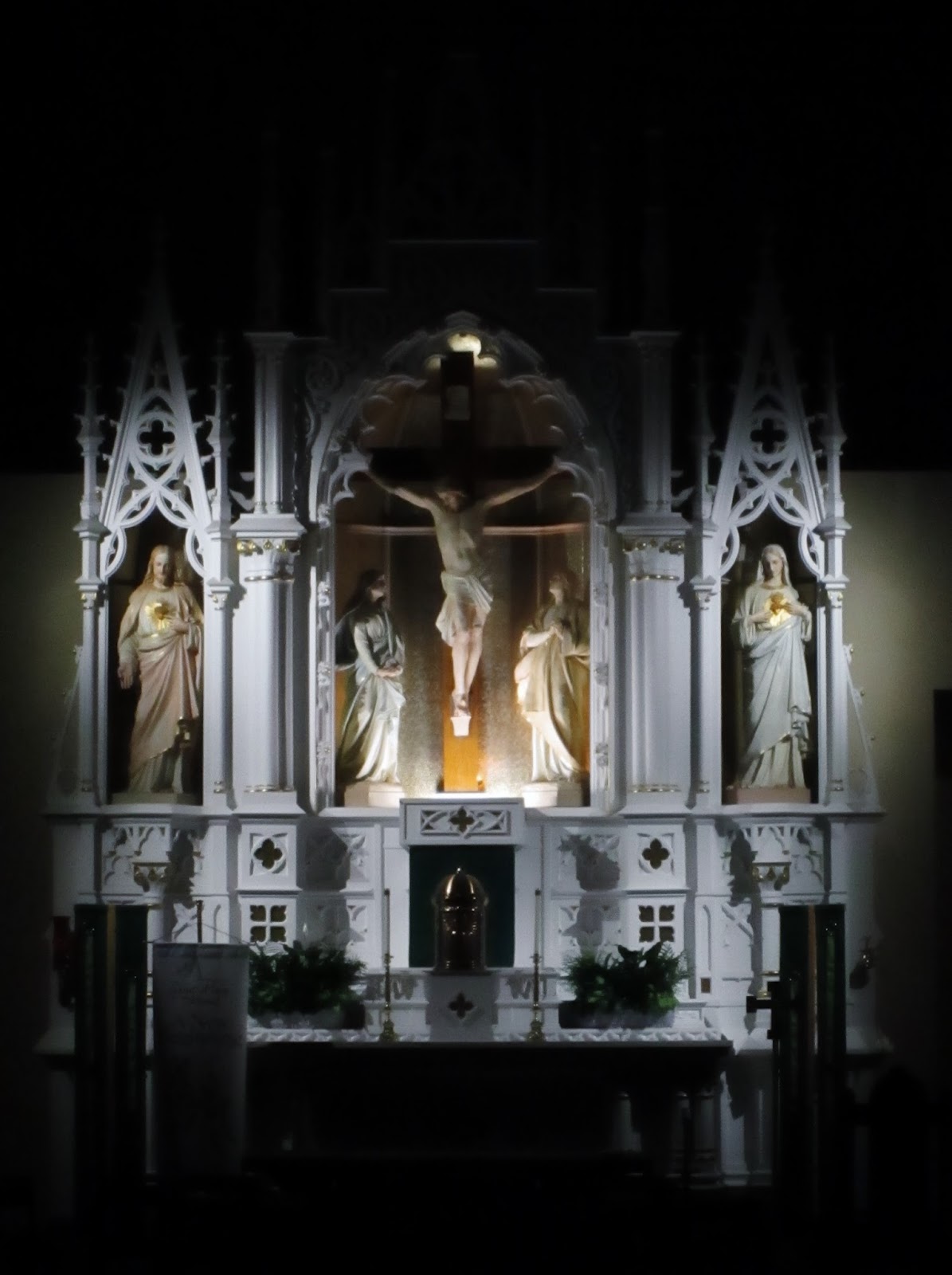 Rianjo was a tabernacle apparition of
Christ, made to Sr. Lúcia dos Santos, in
Pontevedra Spain   The year was 1931.

The Great Depression was in progress,
Austria's Kreditanstalt collapsed, and
Germany had 4 million unemployed.
Christ told Lúcia that the bishops of
the Catholic Church were headed to
the destiny of  King Louis XVI.

Needless to say, those presently in the
church's seats of influence regard the
Fatima message as a thing of the past.
Well, here's their reality check:
At the outset, keep in mind that the manipulative canon law ignorer, Cardinal
Donald Wuerl joined forces with German's Cardinal Kasper, and Father Thom-
as Rosica to commit a coup d'etat on Catholic Church Teaching which dates
back 2,000 years.  Thus, Wuerl and company wanted to make the Church
unrecognizable to the original apostles.

Simultaneously, as is the case with any manipulative power seeker, Wuerl was
made out to be an ascetic living in a closed Catholic school, as if he were liv-
ing in a warehouse.  It turned out that he was and still is living on Washington
D.C.'s posh  Embassy Row in a building priced at $43 million dollars.  He was
discovered to be living in Marie-Antoinette-Luxury.  He lives more lavishly
than did the marquises of Revolutionary France whose destinies were the new-
ly invented guillotine.

1} On December 17, 2010, an educated street vendor set himself aflame, after
having been humiliated & harassed by a Tunisian government official's de-
puties.  This was the one spark that triggered a fire of revolution.  The mafia-
like rule in Tunisia ended in January of 2011.

2} On January 26, 2011, a Northeastern Syrian named  Hasan Ali Akleh set him-
self on fire in public, in protest of the government there.  The following day, a
demonstration was held at Ar-Raqqah, i protest of the killing of two Kurdish-
Syrian soldiers.  The following week, fifteen attendants of a candlelight vigil
were beaten by twenty people not wearing any type of uniform.  By Feb 17,
there was an impromptu demonstration, protesting police beating a Syrian
shop keeper.  Things eventually escalated into civil war which hasn't ended.

3} The 30 year strongman of Egypt was deposed after an 18 day revolution.
This occurred on the Feast of Our Lady of Lourdes, February 11.  He was then
put on trial.

4} In January of the same year, an uprising began in Yemen.  By November,
a strong man of 33 years resigned and went to America for medical treatment.

5} A 40 year strong man in Libya was killed in October of that exact same year.

6} The worldwide Occupy Wall Street movement began on September 17, 2011.
Outrage at those in power was a motivating factor for the movement.

9} In February 2013, a pope resigned for the first time since 1415, the time of
the Great Schism.  Two years prior, in 2011, documentation was sent to the
Hague, requesting that court to commence his criminal prosecution, being
that he was one of the principle players in the abusive clergy scandal of the
Vatican II church.  In fact ...

The Vatican II Church, despite years of ruthless intimidation tactics, ended up
paying over $2.5 billion dollars in lawsuit  judgments and out of court settle-
ments.  In fact, 660 million of it came from the Los Angeles archdiocese.

11} TEA Republicans (21st Century Southern Democrats/Dixiecrats) shut down
the U.S. government, claiming that people can do without most of government.
It cost the US $24 billion.  It cost the Republican Party a future.

13} The day after the American Thanksgiving Holiday was one where Thai protest-
ers went as far as breaking into the grounds of the Army headquarters.  The crowds
throughout the nation have Prime Minister Shinawatra's name on them.  Thus, there's
no peace in Thailand.

14}  Even post-Thanksgiving Day shopping resulted in shooting deaths in America.

Then, in 2014, 95 suspected mafia leaders get indicted and arrested in Italy.

Added to this is the October 2015 attempted coup d'etat in the Catholic Church,
where Cardinals Kasper and Wuerl tried to pervert church doctrine, as there
called for the worldwide sacrilege of Holy Communion, as it applies to those
living in the State of Adultery/Fornication/Sodomy and those who procure ex-
communicable sins.

Then came November 2015, when it was uncovered publicly that Cardinal
Wuerl lives in gluttonously lavish wealth, within a $43,000,000 structure in
the exceptionally luxurious Embassy Row, in a setting of wealth that matched
Louis XVI and Marie Antoinette.

In 2016, terrorism gets stronger.  A democratic party department head, aged 27,
gets shot in the back twice, and suddenly, he ends up gone.  A $20,000 reward
for information leading to his murderers' arrest is offer by Wikileaks.  It was
then later averred by the world-renown Kim Dotcom that this young man was
the one who leaked the DNC emails to Wikileaks.  Then came the London
attacks, along with personal attacks by immigrant gangs in Germany and
Sweden.  Oh, and let us not forget the drug war nation of Mexico.

Background of the Rianjo Apparition of 1931:

For those unfamiliar, fourteen years after the principle series of Fatima appari-
tions came the Rianjo one.  Christ appeared to Sister Lucia, in Pontevedra Spain,
while she was in a chapel.  At the time Lucia was convalescing.  She was visiting
a friend, getting over an illness.

Two years prior, the Virgin Mary appeared to Lucia and announced that the time
had come for the available bishops of the earth, in union with the pope, to conse-
crate Russia to her Immaculate Heart.  This consecration would guarantee God
granting to humanity an era of world peace.  The pope and bishops remained in-
different to the 1929 request,despite the fact that the Fatima apparitions were
officially approved as credible in the same Year 1929.
.
The three treaties of the Lateran Pact were signed shortly before the Virgin Mary's
1929 apparition.  Therefore, the pope's indifference to Our Lady's 1929 message
would only have been the result of him believing that the Lateran Pact was the
answer to all of his problems.

Ironically, signing the Lateran Pact would contribute to the start of WWII, because
the treaty was negotiated by Mussolini.  It guaranteed that he would remain in pow-
er long enough to create an alliance with Hitler.  Therefore, the very treaty that Pope
Piux XI thought would be a remedy was the treaty that helped bring forth the second
world war and all of its destruction.

Now, the 1931 vision was a tabernacle vision.  After all, the hidden Body, Blood,
Soul, and Divinity of Christ is present in all of the tabernacles throughout the earth.
In Pontevedra, he simply became non-hidden for Lucia, much like when he became
suddenly recognizable by two disciples, after he rose from the dead, only to quick-
ly disappear thereafter.

During the 1931 vision, Christ said that the bishops, in delaying his command to
collegially consecrate Russia to his mother's Immaculate Heart, was headed to the
same destiny as that of the King of France.

Concerning many of the criminal accusations leveled against the ruling class at
the Vatican, the preleites there never claimed that they were innocent.  They on-
ly said that they were immune.  It reminds you of a cabal of grifters making pen-
itential facial expressions in the public square, repeatedly mumbling,  "Oh dear.
Tisk tisk.  We're  mortified," followed by each one of them turning around and
walking away with a smirk on his face.

If they were truly mortified, they would done what was required to prevent dec-
ades of evil which turned the Catholic Church into a desolate wasteland.  The
sins of the clergy had the effect of deeply recessed bomb craters.

At this point in time, it would be advantageous for the clerics at the Vatican to
study history in depth, particularly the French Revolution, the Andersonville
Trials, and the Nuremberg Trials.  Should they fail to learn from those erup-
tions in history, they will be repeating them at the end of lives.

If history has taught us anything, it that taught us that there is no such thing as
immunity.  The 1931 prophecy of Rianjo, given by Christ to Sister Lucia duri-
ng an altar apparition, testifies to Heaven's respect for the fact that history has
a way of repeating itself in the course of man abusing his free will.

The prophecy of the bishops' fall from power and eventual execution was due
to the bishops' obstinacy in refusing to comply with the request made by the
Virgin Mary in 1929.  The request, of course, was that the bishops perform
the collegial consecration of Russia to the Immaculate Heart of Mary.

Of course, the infernal Angelo Sodano, protector of international molester
Marcial Maciel Degollado, lied to the world in June of 2000, arrogantly pro-
claiming that the dark days prophesied at Fatima are behind us, all the while
forgetting that the prophesied of Our Lady which were made in Quito Ecuador
and Akita Japan are not behind us.  That is to say that he claimed that the val-
id consecration occurred in 1984, even though the 1984 consecration made by
John Paul II was less involved that his 1982 consecration and Pope Pius XII's
consecration.

How hard can it be to do a simple act of consecration in synchronicity with
all of the available bishops of the world?   Would it be more difficult than
enduring the dominoes effect of a civil uprising, eventual apprehension,
and physical harm, as was described in St Pius X's vision?  Incidentally,
Pius X had a vision where he saw a future pope fleeing over the bodies
of dead cardinals.

A tree is known by its fruits.  A bad tree cannot bear good fruits.  The pre-
sent Vatican has shown by its fruits that it has no interest in honoring Mary
or in weeding out of the clergy the wolves within it.  It spent years saying
that her concerns were a thing of the dark past and that the bishops don't
have to be bothered by her.  As a result, we now live in a more sick and
twisted era where society is in organized forms of chaos ...  in organized
forms of mortal sin.

This includes forms of grand larceny known as attorney fee price gouging
and big oil price gouging, as well as futures speculation.   The result was a
secular wasteland of economic sink holes, sexual anarchy, domestic violence,
fragrance gluttony, sweatshop profiteering, sex slave trafficking, fluent drug
trading, the complete disregard for the need of a day of rest, rising rates of
cancer and asthma, sheer heresy being promoted directly in the church, the
proliferation of military spending, sodomy in the clergy, the estrogenation
of water supplies and the resultant hermaphrodite amphibious life in those
waters, and the general disregard for the environmental stewardship of the
Earth.