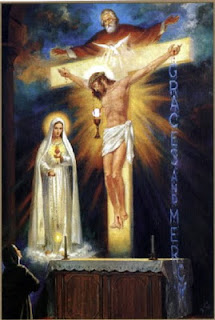 In 1960, when the Vatican hired an agency
to send forth a press release on the Third
Secret of Fatima, the statement admitted
that "words spoken by Our Lady" to the
three Fatima visionaries existed as a part
of the Third Secret.  Therefore, Cardinals
Sodano, Bertone, and Ratzinger were the
unconscionable deceivers in the June 2000
press release on the subject.

Moreover, there were individuals who did
read the Third Secret and who gave general
comments about its contents.  One is that it
has nothing to do with nuclear disaster, as
was thought during the height of the Cold
War in 1960.


Also keep in mind that Pope Benedict XVI expressly said that no one is bound to
believe in the June 2000 interpretation of the Third Secret.  He also said that we
would be deluding ourselves to think that the message of Fatima is behind us.

Now for the Third Secret

The Third Secret of Fatima is a complete indictiment against the Vatican, warning
the Faithful that wolves in shepherd's clothing would take control of it.  Our Lady
was warning the flock of the evil which was destined to exude from the Vatican,
if her requests were ignored.  This evil has been evidenced repeatedly in the late
20th and early 21st Century.

Examples of Vatican corruption are 1} the Maciel cover-up.  He was the most no-
torious molester of all-time and was highly respected by a John Paul II who did
know about the sex abuse scandal in the present tense.   2} the recent catering to
the clerics proven to be corrupt as in:
http://www.donaldwuerl.com

3} the Vatican Bank scandal which resulted in the Vatican being ordered to pay
$224 nillion to creditors and which also resulted in the arrest of Monsignor Nun-
zio Scarano for alescing from the bank the equivalent of $600,000, and which ad-
ditionally resulted in the arrest of Monsignor Silverio Sica, for smuggling to Italy
Euros dollars (unaccounted currency) from Switzerland.  4} the Vatileaks saga
where it was conjectured that certain clergyman used butler Paolo Gabrielle as
the fall guy, in seeking to let the public know that the Ratzinger Papacy was a
tenure of corruption,  5} The Sexual Abuse Scandal,

The corruption which was guaranteed to unfold from the Vatican why the reason
why Our Lady expressly ordered Sister Lucia to state that the sealed secret was
not to be opened until the arrival of 1960, and that it would be opened by either
the cardinal patriarch of Lisbon or the bishop of Leiria.  Fatima, incidentally, is
under the jurisdiction of the Bishop of Leiria.
Now, the Third Secret is preceded by the phrase, "In Portugal, the doctrine of
the Faith will always be perserved."  Thus, the Third Secret was to be opened
by the standard bearers ... by the keepers of the gate ... by those guaranteed to
keep the doctrine of the Apostles in tact.  One of the two previously mentioned
bishops were the ones who should have read the secret in 1960.

The Vatican refrained from revealing the verbal part of the Third Secret, be-
cause it is so damning to the Vatican.  After all, when you wear the shoes of
the Galilean fisherman, you do not have to live in wall to wall luxury.

In 1960, when Pope John XXIII,  said that the Third Secret was not for his
papacy, he implied that the Queen of Heaven was an imcompetent moron
who didn't know what she was saying when she expressly ordered that the
Third Secret be opened in 1960.  He claimed to know more than she did.

Of course, Vatican II was in its beginning stage at the time, and it was
guaranteed to corrupt the Faith and cause a great number of people to
stop going to Sunday Mass and following standard moral precepts.

1960 was the beginning of upheaval.  It was quite a coincidence that
the Third Secret was to be opened at that time.  But, there is no such
thing as coincidences.  Our Lady knew what was right.  John XXIII
did not.  If he simply would have done the consecration, he could
have spared millions.  Many wars would have been avoided.  Thus,
the obese John XXIII caused a lot of havoc by his disrepect.

Now, the late Malachi Martin was a periti (assistant) at the second Vatican
Council, for Cardinal Augustin Bea.  Under an oath of confidentiality, he
read the secret.  Years later, he said the following:

- Russia and the Ukraine are mentioned in the Third Secret, but NOT the
United States.

- It deals with the Great Apostasy mentioned in Paul's second letter to the
Thessolonians, and it will stat at the top of the church's hierarchy.  In as
much, 1/3 of the hierarchy will apostasize.

-The Third Secret prophesied "several" chastisements, and no one on Earth
will be immune, geographically speaking.

In fact, during a radio show, a person read what was purported to be a line
from the Third Secret, confided to someone by a Jesuit priest.  It dealt with
Satan being in control of one of the popes.  After having heard the sentence,
Malachi said that the person who wrote that line either read the secret or was
told the secret.  Thus, the Third Secret involves a Satanic Puppet Pope and
apostasy, as well as Russia and the Ukraine.

All in all, the purpose for the prophesied chastisements is to cleanse mankind
of its modernized habit of evil.  It will be a devastating cleansing process.

The valid consecration of Russia can prevent it.  Consecrating the world ne-
gates the point of consecration.  To consecrate is to set aside part of a whole,
for the sake of the whole.  Russia has to be consecrated by name by all of the
available bishops.  The result promised is the conversion of Russia from sin
and a period of World Peace.  What do today's bishops have against World
Peace?
from Patrick Anthony Pontillo on 10/13/2022