The Eve of Bastille Day and the Vision of Hell, 1917 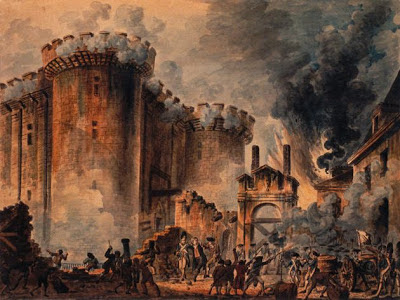 Bastille Day is the anniversary of God abandoning the French monarchy.  It com-
memorates the phase of history when the Divine Guillotine of an exasperated God
fell upon an unresponsive House of Bourbon.  Jump backward 100 years before
the French Revolution ignited.  The paragraph-long background goes as follows:

Christ had previously appeared more than once to a French nun of the Visitation
Order, in Burgundy, between 1673 and 1675.  Her name is Margaret Mary Ala-
coque, a canonized saint.  If you are real, as opposed to a hypocrite, the words
which Christ spoke to her will change your life.  None the less, it was June 1689
when Christ appeared again to the same Margaret Mary.  This time, he instructed
her to relay a decisive message to the reigning king of France. It happened to be
Louis XIV at the time, and it isn't even known if he was handed the message.

The eternal Father, wishing to repair the bitterness and agony that the Heart
of Jesus endured in the palaces of earthly princes, wishes to make use of the
reigning monarch of France to proclaim public devotion of reparation to
that Sacred Heart.

In brief summary, Christ wanted the King of France to consecrate himself and his
kingdom to the Sacred Heart of Jesus.  The result for doing so, Christ promised,
was that the House of Bourbon would be granted victory over the enemies of the
church who were more than willing to dismantle the French monarchy as much as
the Catholic Church.  The reigning monarch at the time was the one whom history
nicknamed the Sun King.  Needless to say, Louis XIV established no type of devo-
tion to the Sacred Heart of Jesus at court.  Nor did he perform any consecration
of France to the same Sacred Heart.

Louis XV performed no such consecration, either.  Nor did he establish any devo-
tion to the Heart of Christ in the palaces of France.  Neither did King Louis XVI,
the grandson of the Sun King.  As a result, one hundred years (and twenty-seven
days) after the apparition which conditionally promised victory to the Bourbon
kings if and only if one of them would honor Christ's request, the door closed on
the French monarchy.  It was July 14, 1789.

A Brief Background of the July 13, 1917 Fatima Apparition
(If you're familiar with it, jump to the next section.)

On the Eve of Bastille Day, 1917, the Virgin Mary returned to three Portuguese
shepherd children and showed them a vision of Hell.  It was fitting for the sea-
son.  During her July visit, the Virgin Mary extended her hands downward, as
if to be opening a window.   This happened the prior month, but in June, the
three children found themselves immersed in the presence & majesty of God.
When July 13 came, the children saw Hell.

Sr. Lucia stated that she saw the souls of humans falling into Hell at the rate of
falling snow.  She said that she was also able to distinguish the damned humans
from the demons.  The fallen angels (aka demons) looked more animalistic: like
distorted beasts.

Also on July 13 came Mary's mention that she would later ask for the collegial
consecration of Russia to her Immaculate Heart ... on the eve of the day which
commemorates the devastation which comes from refusing to comply with a re-
quest for a sacred act of consecration.  This is timing and synchronization at its
finest.

Mary stated that the consecration needed to be done by the Vicar of Christ, in
union with all of the available bishops of the earth.  Furthermore, Mary confid-
ed the Third Secret of Fatima to the children on July 13.  The third secret was
told after Mary mentioned a list of the evils which would befall humanity if the
Vicar of Christ would fail to perform the consecration ... and if people failed to
perform the communion of reparation to her Immaculate Heart.

The reigning pope at the time neglected to have the consecration performed.
Meanwhile, the laity of the church apparently neglected to perform the acts of
reparation, in restitution for the blasphemies being committed against the truths
about Mary, such as her immaculate conception, when she was created free of
the state of original sin.

Now, why did Mary ask the pope and world's bishops to consecrate Russia?
ANS:  Part One of the answer is that an atheistic Russia wasn't going to do it
on its own.

Let's go a step further.  Why was the inclusion of the Catholic Church's bish-
ops necessary to convert a nation that was soon to fall into atheism, injustice,
and even genocide?  ANS:  For the Gift of Discernment to blanket Russians.
This gift comes through the sacramental channels of the priesthood that has
remained in union with the Chair of Peter, as opposed to a separatist priest-
hood that doesn't acknowledge the primacy of Peter.

Discernment is the gift that prevents a person or an entire nation from being
deceived by the Devil.  Discernment occurs when one does what the church
calls "obedience" ... of obedience to an ordained church authority not locked
in heresy.  In fact, the Gift of Discernment is the entire point for the existence
of the Chair of Peter.  Christ established the office of the Prince of the Apostles,
otherwise known , aka the papacy, so that the church would not fall into error,
concerning its doctrine.
The Insulation Effect

Next question:  Why did the Virgin Mary in 1917 and 1929, as well as Christ
in 1931, state or infer (depending on the occasion) that all the bishops of the
world needed to perform the consecration?  ANS:  It is because Russia was
poised to spread its emerging errors throughout the entire world.  Thus, each
available bishop was to fend off the coming errors that were to spread every-
where.  View this in the following way:

What is wrong with the picture painted in June of 2000?

Angelo Sodano was the criminal accomplice of serial molester Marcial Maciel
Degollado.  He was the Vatican secretary of state in the Year 2000.   In keeping
with his deceitfulness, Sodano claimed that John Paul's 1984 solo consecration
of the world was the one that Heaven accepted as the collegial consecration of
Russia to the Immaculate Heart of Mary.  Time out.  What is wrong with this
picture?