EWTN Letter about Cardinal Donald Wuerl of Washington, sent by its founding president to me.

In re: The Thoroughly Disgraced and utterly ruthless Cardinal Donald
Wuerl who literally had more than one youth-molester protection ring.

The weaker the leader's character, the more vicious his deeds

Keep in mind that Mother Angelica publicly admonished then LA arch-
bishop Roger Mahoney, only to have the prelate perform bully tactics up-
on the well-intentioned founder of EWTN.  Well, a package of evidence
was sent to the EWTN people, concerning Donald Wuerl, to no avail.
However, Mother Angela allegedly stated in private, "Donald Wuerl is
as gay as they come."  None the  less, Donald Wuerl's weekly TV show
was dropped from the EWTN schedule long ago, whatever be the reason.

The letter posted below was the response of EWTN, after a package of
incriminating evidence was sent to it, concerning Wuerl.  It was sent to
EWTN years before Wuerl was to be transferred to DC.  Therefore, it
was sent years before he was elevated to the College of Cardinals.  This
shows that Wuerl's corruption was already known, yet nobody did any-
thing to stop it.  Wuerl was elevated instead of disciplined, as if to have
bee rewarded for his viciousness.

This teaches an important point:


The scandals of the church, as expert witness and author Richard Sipe
illustrated, started at the top.  In the Fr. James Torquato retaliation, we
have a case in point where the cover-ups of the Vatican II church were
sustained be imposing fear upon the victims, advocates, and whistle-
blowers of those protected by corrupt bishops.  The laity feared being
bullied by abusive bishops and priests.   They feared undergoing what
a few of us were forced to endure during the Torquato Retaliatio.

As a note, the papal nuncio was contacted during the first phase of the
Torquato Retaliations, and he said that he would do no more than con-
tact Donald Wuerl about it.  It was equivalent to contacting the fox
already in the chicken coup.

Being an object of church retaliation during the tenure of John Paul II
meant that you were entirely unprotected, unless someone in secular
law enforcement or civil law would reach out to help you;   and not
look the other way.  The letter below is proof that the EWTN  Televi-
sion network looked the other way, thereby negating its purpose for
being on air.  Such a thing was a sin of cooperation.

Lots of hard copy evidence are online at:

Prelates such as Wuerl are a fulfillment of the Virgin Mary's prophecies
spoken at Akita Japan and Quito Ecuador.  She predicted a corrupt
priesthood, and Wuerl can symbolically be described as the Decaying
Tooth Fairy, and a lengthy outline of his corruption can be found at the
site posted above.  There is where you can learn of:

1} Wuerl being publicly recognized by a district attorney as having been
uncooperative with law enforcement officials  in what resulted in the in-
dictment of three of Wuerl's priests.

2} Wuerl retaliating against school children, because their parents protested
against Wuerl, on TV.  He closed their children's school, and he became
intimidated by the fact that those parents didn't worship him as a god.

3} Wuerl locking a seminarian and credible accuser into Wuerl's then diocese
and then refusing to ordain him.  He was never been realized from the Diocese
of Pittsburgh, so as to be able to be ordained elsewhere.

4} The Cipolla case turned out to have been a cruel hoax.  Wuerl only became
famous for removing Cipolla from ministry and then keeping him out, while the
local newspapers claimed that Cipolla had been arrested for molestation.  Well,
Cipolla was never arrested.  Accusations against him and his then-bishop were
fact checked and proven to have been lies.  Wuerl did this, so that he could use
Cipolla as a smoke screen, while Wuerl hides evils that have now been unveiled.

5} Wuerl covered up the molestations of an Edward Huff who was reported to
Wuerl three times, by three different groups of concerning parishioners.  It ended
up in Huff being criminally indicted and prosecuted.

In order to learn how on-target Mary was in prophesying corruption at the top
of the Catholic Church, go to www.donaldwuerl.com.  The fact that he is still in
power is proof that there has been no Triumph of the Immaculate Heart of Mary,
as was falsely claimed by some of the most corruption cardinals in the history of
the church, namely, Sodano, Ratzinger, and Bertone who was caught lying by
journalist Antonio Socci.

For the record, this letter was an untold insult, being that it admitted that Wuerl
was someone who should never have been a bishop, yet people in a position to
give tremendous help ended up giving zero help when it was needed. 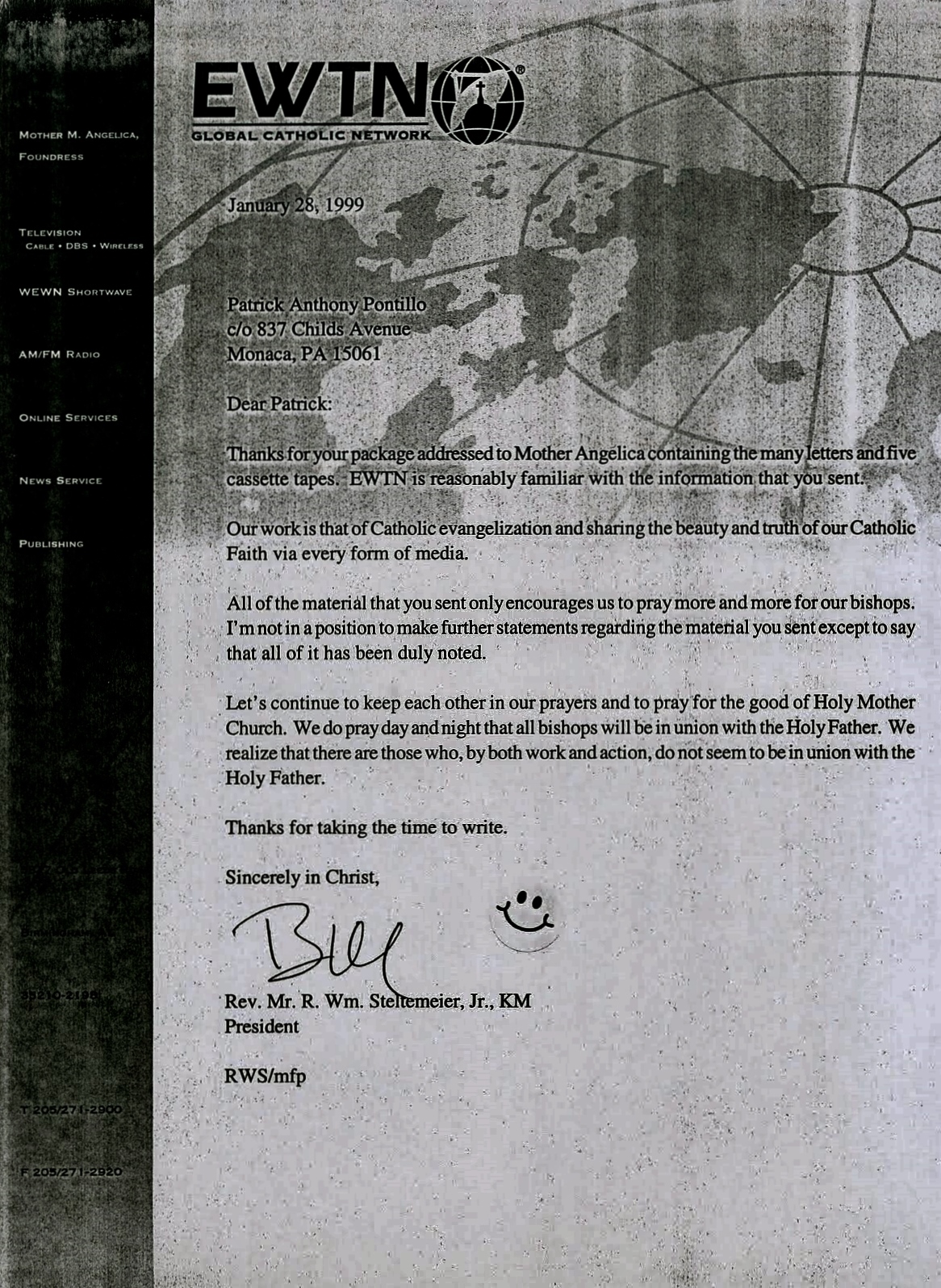