The Angel of Peace's Involvement in the Fatima Apparitions 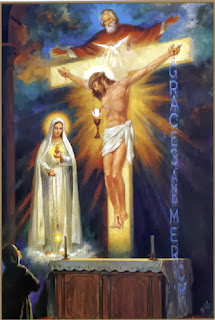 In the Spring of 1916, the Angel of Peace
appeared to Portuguese shepherd children
a few times.  He began in the usual way, by
saying, "Fear not."  The same angel then
said, "Pray with me."  Catholic Church tra-
dition had long since identified St Michael
the Archangel as the Angel of  Peace.

The Fatima children were most affected by
the angel's crystalline beauty and majestic
countenance.   In fact,  he looked no older
than a teenager,  even though he was time-
less.  The following year, the three children
would be visited  by a lady made of light.
Of cours, Angelo Sodano, Joseph Ratzinger (the Cronyism pope), and Tar-
cisio Bertone lied to humanity in June of 2000, with their Third Secret press
release.  Firstly, it was publicly announced in 1960 that the Third Secret also
comprised words from Our Lady, spoken to the children of Fatima, and no
verbal message from Mary was ever released by the present-era Vatican.

In addition, the visual part of the Third Secret comprised multiple soldiers
killing a man in white who appeared to be the pope, and doing so in a city
half in ruins, while others were simultaneously being killed.  Yet, Sodano
claimed that the Third Secret was of the failed assassination attempt of a
pope would live 25 additions years, even to the point of revisiting ski slopes.

Well, an 1884 vision of Pope Leo XIII included the rescue of humanity be-
ginning with the intervention of Saint Michael the Archangel.  Fatima be-
gan a year before May 13, 1917, with a visit from the Angel of Peace.  In
Catholic devotion, Saint Michael was given the title, Angel of Peace.

The most notable message from the Angel of Peace was,  "What are you
doing?  You must pray.  Pray a great deal, for the Hearts of Jesus and
Mary have designs of great mercy for you."

While prostrate, he prayed the following, and then instructed the children of
Fatima children to pray that way, stating that Jesus and Mary were ready to
listen to them:

3} The same angel, in one apparition identified himself as the guardian angel of
Portugal.  In fact, in one apparition, a chalice and a consecrated host stood
suspended in midair, upon which the angel gave the children their first holy
communion, after having prayed the following:

Father, Son, and Holy Spirit I adore you profoundly.  I offer you the most
precious body, blood, soul, and divinity of Our Lord Jesus Christ, present
in all the tabernacles throughout the world, in reparation for the outrages,
sacrileges, and indifference by which he himself is offended.  I offer to you
the infinite merits of his most sacred Heart, and those of the Immaculate
Heart of Mary, for the conversion of poor sinners.

Years later, a theologian objected to Sister Lucia, the only surviving Fatima
seer, being that two of them died during the Great Influenza outbreak of 1918.
He said that an angel can't give someone holy communion.  Lucia's response
was, "Maybe the angel didn't know his theology."  For those not well versed
in English or who are using a translation machine, this was a sarcastic state-
ment, meant to be a joke.

4} Our Lady finally appeared on May 13, 1917, the Feast of Our Lady of the
Blessed Sacrament.  It was a friendly and introductory apparition with a
number of things spoken.  She did mention that each of the children would
one day be in Heaven, the two youngest very soon.  The ages of the Fatima
children were 10, 7, and 6.

Lucia was ten at the time and Our Lady told her that Our Lord wanted Lucia
to stay on earth longer than the other two children, to be a vehicle for making
the forgotten Virgin Mary and ignored Holy Trinity once again known and
loved.  Our Lady expressly said that she wanted Lucia to learn to read and
write.

The logical surmise is that Our Lady wanted Lucia to be able to write books
or articles, as well to go on a lecture circuit of some sort.  Yet, in the decades
to follow, Lucia was hidden away.  Of course, this was during the years of in-
tense Vatican corruption, as was evidenced by the mere fact that a butler saw
it to be a matter of conscience to make Vatileaks an open reality.  This was
also evidenced by the Maciel Scandal, the bank scandals, and  the molester
priest cover-ups, Lucia was a light illuminated by the Virgin Mary.  Corrupt
clergy members, such a Bertone, put Lucia in a leaden box, for no one to
hear, read, or see.

Now, Lucia saw, heard, and talked to Mary.  Jacinta saw and heard Mary.
Francesco only saw Our Lady.  Lucia and Jacinta had to tell him what she
said, after each apparition.

Our Lady's arrival would be briefly preceded by what looked to be sheet
lightning flashing through the clouds and/or sky.  It was Mary's brilliance,
after entering the realm of time & space, from the realm of timelessness.

An interesting thing was revealed during the first apparition of Fatima.  Lucia
asked about the spiritual whereabouts of a young lady who died at 18 years of
age.  Mary said that she will be in Purgatory until the end of the world.  Well,
a few persons born in the 1930s and 1940s expressed how shocked they were
that a young "innocent" girl could be immersed in Purgatory.  That erroneous
conclusion was that God is an overly demanding God, for him to sentence
someone so young to such an intense spiritual cleansing.  Time out here.

Do you know what teenagers have been doing in the back of automobiles?  Do
you know what they have been doing at rave's, proms, frat parties, and similar
venues?  Do you know what drugs circulated through their systems? Add to the
venue the hay lofts of rural towns in the early 1900s.  Next, add to the repertoire
lying and stealing, as well as the drugs which were far more prevalent at the time
than assumed.  Plus, there was the matter of occult practices and divination.  Ev-
en in Lincoln's White House, there were seances.  So, think.  If people were vir-
tuous in 1917, Our Lady wouldn't needed to have visited Fatima.  So too was this
the case with Paris in 1830, La Salette in 1847, Pontmain in 1871, Pellevoisin in
1876, Knock Ireland in 1879, Beauraing in 1932, and Banneux in 1933.

Why was there shock over Our Lady stating that a deceased teenager was to be
in Purgatory for an intense duration?  Those persons should have felt a sense of
relief that the young lady wasn't burning in Hell for all eternity.

Heaven had two purposes for Fatima:

1} To prevent people from falling into Hell.

2} So that the power of angels can bridge into the lives of men.