The Hail Mary: The Cadence of Angels 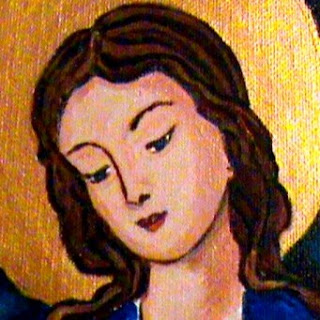 She lived in a nation known for strife, grief, and warfare throughout a continuum of cen-
turies.  This included the film documentary centuries of modern times.  The irony is that
the capital of her nation was called, the City of  Peace.   Her locale was a valley hamlet
which saw its share of strife in 67 C.E., but which wasn't mentioned in historic texts dat-
ed before 200 C.E.   None the less, the artifacts of her general locale date back 2,000
and 9,000 years.  Her home showed signs of life throughout a succession of centuries.

She never married into a wealthy family.   Nor did she hold office.   Coffers of treasure
were not hers to possess.    In fact, this woman never possessed anything that would be
regarded today as empowering to women.   Yet, her power now exceeds that of every
women who ever came to be.

She was called blessed among all women by the wife of a high priest who was given
an unexpected revelation about her.   In response, the lady whose soul reflects starlight
said,  "... From henceforth, all generations will call me blessed, because he who is
mighty has done great things for me, and holy is his name."

For those unfamiliar, the Anglo Protestant Bible Belt World views Mary as a very
unwelcome presence so much so that it's adherents declare that having recourse to
her is evil.  Yet, the Bible expressly states that all generations will call Mary blessed.
This means that, if you don't call Mary blessed while claiming that the Bible is the
revelation of God, then you are hypocritically anti-Biblical.  Of course, those who
claim to be "Biblical" ignore pivotal passages of the Bible.

Her own words were proven to be prophetic.   Prayer books, theology books, art, In-
ternet sites, film, church structures, religious orders, and the supply of rosaries that
were made throughout the centuries prove that a representation of humanity in every
generation after Mary has called her blessed.

The phenomenon of Mary has not been duplicated.  Nor has the envious hatred of her.
Mary has been treated as an enemy of God and a nuisance of mankind in specific sub-
cultures.  Thus, there is the duty to defend her.  As a general rule, the more vulgar the
subculture the more the hatred toward the Virgin Mary.  After all, it is written,  "Lust
indulged afflicts the soul."   In light of this, it's no mystery as to why certain people
get almost convulsive at the name of Mary.   This is because darkness is incapable of
comprehending light, especially when it's gentle starlight.

Before the age of wall to wall profanity, it was commonplace to associate the name of
Mary with Catholics.  Today, however, the name of Mary conjures images of people
claiming miracles in streaked windows and on pieces of toast.  The modern mind has
become so Orwellian that people now claim profane things to be sacred.

Catholics in years past were accused of idolatry for wielding rosaries and keeping de-
pictions of Mary in their living quarters.  Yet, the accusers would think nothing of hav-
ing their favorite singing star poster posted on a wall or a billboard.  In addition, it has
been the most vulgar element of humanity who has obsessed itself with insisting that
Mary didn't remain a virgin, as if being the Ark of the New Covenant was a fleeting
and insignificant thing ... as if the Law of Moses (which was the reason why Mary
was to remain a virgin) had zero significance during the Jewish woman's life.

In light of all the hatred which has been hurled at Catholics for their friendship with
Mary, the act of defending devotion to Mary is always the order of any day in our
tattoo-ridden and body-pierced society.   Defending the sanctity of Mary is equally
in order.

The reason why Catholics have a reflex action to be respectful and affectionate to-
ward the Virgin Mary is because they see her as beautiful and intriguing as a starlit
night.  What decent person would shun the beauty of a starlit night?  ANS:  Those
immersed in animal instinct.

What real man would be too numb and too stone cold to be moved by the Virgin
Mary?   What person in need of counsel would not have his innermost recesses in-
fluenced by her philosophic touch?   After all, she saw her son die in a mob scene.
She had to take the same son to Egypt at the beginning of his life.  At this hour, she
continually sees multitudes of humanity speaking curses against her son, as well as a
line of mockeries against him, especially when the name of Mary Magdalene comes
to the fore.   A masterpiece of conversion has been turned into a gossip column article.
Such a thing is as profane as claiming that a streak in a window is a Marian apparition.

Go one step further.   Consider the three nations of continental Europe most known for
Catholicism in their histories.   Namely, they are Spain, Italy, and France.  Religion may
be laid waste in vast sectors of those nations today, but the Roman Catholic influence
molded the personalities of those nations  for centuries.   Now, what general observa-
tions are stereotypically associated with the rose garden Italian, the Frenchman, and the
Spanish gentleman?  ANS:  Romantic tendencies, suavity, charming gentlemanship, the
rose garden ambiance, the poet, and things similar.  In light of this, what influenced this
reflex action found in the stereotyped suave Latin gentleman?   ANS:  The Charisma of
the Virgin Mary and devotion to the saints.

The Words of God the Father

Angels are messengers of God.  At the Annunciation, Gabriel was speaking the words
of God the Father when he said, "Hail, full of grace.  The Lord is with You.  You are
the most blessed among all women."   In light of this, it is clear to see that anyone who
hates the Hail Mary hates God the Father, being that he was the first person to spirate
those words, through Gabriel.    In a similar fashion, those who recite the Angelic Sal-
utation of Gabriel take on the power of the Eternal Father.

Heaven recognizes a sin against God known as blasphemy against the Immaculate Heart
of Mary.  Such blasphemy is a sin against the Will of God, as well as a simultaneous sin
against the mind of God and the power of God to do great things in a humble lady.  The
first person to commit this type of blasphemy was Lucifer, shortly before he departed
from Heaven like a bolt of lightning.