Protestantism is the Secularization of the Sacred and an Anti-religion

The absence of the sense of the sacred in Protestantism is blatant.  Everyone
sees it.  They see the Protestant preachers wearing business suits, as if Chris-
tianity is the religion of cold, hard cash.  Therefore, religion to these guys is
nothing but a money-making scam.  All in all, the TV evangelist "suits" have
turned the sacred into the secularized profane.

As far as goes Protestantism in its capacity of an Anti-religion, it is a complete
abbreviation of original Christianity which comprised priests, bishops, the sacra-
ments, penance, praying for the deceased in Purgatory, and the moral obligation
to make restitution for sins of theft and deception.  The Protestant doctrine de-
clares that you don't have to go to confession and receive absolution.  You don't
have to be confirmed,  and according to the same doctrine, you neither have to
do any acts of penance or pay people the money you stole from them.  There is
no catechism to learn, because, according to Protestanism, you are your own
pope who can make a doctrine that contradicts any of the millions of other
personal popes.

All in all, Protestantism basically states that you don't have to do anything, except
a ritual that instantly makes you "saved" for all time and eternity.  The great evil in
that ritual is that it denies the necessity of the sacrament of Baptism.  And and and,
the Gospels expressly quoted Jesus Christ as saying, go forth and make followers
of all nations, BAPTIZING them in the name of the Father, Son, and Holy Spirit.
Thus, each Protestant claims that he knows more than Jesus Christ.

The Protestant Denial of the Need of Baptism for Salvation, replaced by a
simple-minded ritual where you say, "I accept Jesus Christ as my Lord &
personal savior

Here is Protestant Contradiction #1:  They originally stated that you have to be
baptized again, being that they do NOT believe in the validity of infant baptism.
Then, they say that you merely have to "accept Jesus Christ as your Lord and
Personal Savior," thereby denying that Christ founded an all-encompassing
church that welcomes any living human to join it, and thereby denying that
you must be baptized, in order to be remitted the state of Original Sin.

For those unfamiliar, the "Born-again Christian"  .... aka Protestant ... teaching is
that all you have to do is walk up to "the altar" of a Protestant church and say that
you accept Jesus as you Lord, etc.  This is called an "altar call."  Stop there.

Firstly, Protestant churches do NOT have altars.  They have railings where you
kneel.  An altar is a consecrated piece of furniture where you make a sacrifice,
and in Catholicism and Orthodoxy, Christ is sacrificed under the transubstatied
form of consecrated bread and consecrated wine.  None the less, the Born-Again
Christian ritual is very simple-minded, and it is claimed that, as soon as you say,
"I accept Jesus Christ as my Lord and personal savior" you are forever saved.
Thus, they claim that you do not need baptism for salvation, thereby claiming
that the four authors of the four Gospels are liars.

The Protestant Hatred of the Virgin Mary

It's the religion which states that you detract from Jesus by having recourse to the
woman whose blood became his blood.  They say it's the sin of idolatry to have
recourse to Mary, the woman who raised Jesus and knew him better than any
member of the human or angelic race.  They say that it's a sin to ask Mary to
pray for you.  Their hypocrisy consists in the fact that they say that you do
NOT have to stay away from sin in order to not be in Hell for all eternity.

The recurring them in all Marian devotion consists in the devout saying:

Holy Mary,  Mother of God, PRAY FOR US SINNERS, now and at the hour of
the death of each of us.  Uniting our prayers with Mary's perpetual act of prayer
is the essence of Marian devotion.

The essence of Marian devotion consists in the following:

You open yourself to realm of angel where Mary is Queen.  Mary then takes
the Child Jesus and places him in your arms, as if you were a visiting shepherd
on the first Christmas night.  Then, when you did, Mary takes you and places
you in Jesus' mystical arms.  Jesus mystical arms is his eternal realm.  Its' the
House of Jacob, mentioned by the Archangel Gabriel during the Annunciation,
where Mary was told that she would conceive and bear a son who must be
named Jesus.  Jesus means "God is Salvation."

Worship is the act of attributing the beginning and end of your existence to
someone or something.  Those devoted to Mary know that she didn't create
the Heavens and the Earth.  Thus, we don't worship her.  Concerning the Pro-
testant claim that we worship her, only a pervert would come up with that
idea, in the first place.  That wasn't even on our minds.

Furthermore, Jesus and Mary are NOT in competition with each other.  There is
no jealously between the two.  Each one wants to honor the other and each one
wants the other loved by humanity.  They want people to know the love they
see in each other.  Jesus wants you to know Mary and Mary wants you to know
Jesus.  They are one with each other, and infinitely so.  In as much, the greatest
proponent and advocate of Marian Devotion is Jesus, himself.  Not honoring his
mom deeply offends him.

In fact, you are saying that he cleanses no one of sin, but merely lets people who
are corroded with sin into Heaven, if they do that silly Southern Baptist church
railing ritual which is erroneously referred to as an "altar call."  Well, that's not
Heaven.  Heaven is NOT a place where you can bask in your lusts with immun-
ity, as the Southern Baptists long since claimed.  Heaven comes from within the
soul where within is the Holy Spirit.  What makes Heaven consoling is the people
in it.  Therefore . . .

When a saint dies, the proper thing to say, upon his/her death, is: 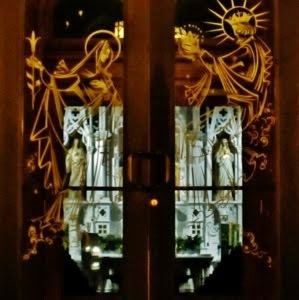